Sorry for the brief hiatus. Spencer and I have been bunkered down for the last week working hard, and haven’t done anything worth sharing. At the same time, my sister Rebecca was gearing up to make a 15 hour transatlantic flight with her two year-old son. She is very brave. They both arrived last night, tired but happy. Here is her own wise advice for surviving such a ordeal with sanity intact. 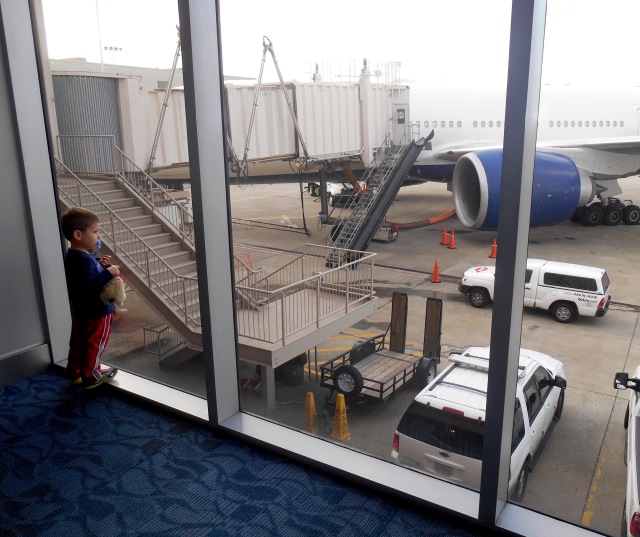 As I eagerly planned my trip to South Africa the most daunting aspect of the trip by far was the overwhelming task of getting from Savannah, GA to Johannesburg, SA with a two-year- old toddler in haul. I was confident it could be done, but also pretty sure it might result in one of the most miserable days of both of our lives. I did my research, reached out for advice from as many people as I possible could, and prepared for the worst!

Here are a few tips that helped make the trip a success:

Make sure that you pick a flight that is going to be the least amount of hassle. I looked at flights for weeks, comparing costs and flight times. I considered driving several hours to an airport that might offer cheaper flights, or taking multiple layovers, which would reduce the ticket price by several hundred dollars. In the end though, I decided that adding additional travel time to an already very long trip, and having to navigate through multiple airports with a child just wasn’t worth it. Taking off from the small Savannah airport made checking my baggage a breeze, and meant that my mom could help me until I got to security.

Fortunately, the flights I chose were perfect in regards to timing. The flight from Savannah took off at 4:45 PM, so Jacob was able to get his regular nap in before leaving. We had a 2-hour layover in Atlanta, which was enough time to get to our terminal and grab some dinner. The flight took off from there at 8:35, which is Jacob’s normal bed time, and meant that he was out before we even reached altitude.

During the first, short flight we were in a small airplane and had the window and aisle seat so that Jacob could look out the window. On the longer flight there were 9 seats across arranged 3-3- 3. I choose an aisle and middle seat so that we would be able to get out easily into the isle, and if someone was next to us I could put the car seat in the middle and not block them in. As it turned out when I checked in before our flight the attendant at the desk took one look at Jacob and said, “I am just going to move the person that was sitting next to you”. This was a blessing as it meant we had all three seats, and when Jacob got uncomfortable sleeping in his car seat I was able to lay him across the middle seat to sleep, and it allowed him some play room while he was awake.

4. Make sure you are healthy and well rested before you embark on your trip.

I was very attentive to making sure that Jacob and I both got to bed in time, and he got his regular naps in the days leading up to our flight. You don’t want to start out with a cranky child or you will end up with a much crankier child. As it turns out, Jacob slept a fair amount on the plane. I however, did not, so I was glad to have at least gotten some good sleep the night before. I also loaded us up with vitamins in the two weeks prior to the trip to help keep our immune systems up.

Airplanes are dry, and the A/C is blowing continuously so it will soak every drop of fluid out of your body. While I drank as much water as the flight attendants offered, I still felt parched. I made sure to keep Jacob’s cup full and encourage fluids for him, too.

Jacob is potty-training which gave me a perfect excuse to get up and take him to the bathroom at least once an hour while he was awake. There is not a lot of room to stretch your legs on the plane, and the flight attendants frown on passengers lingering in the aisles, so those frequent trips to the bathroom were just enough to stretch our stiff muscles and break up the monotony.

For a long flight with toddlers I would recommend bringing a light-weight car seat on the plane. Jacob has always been a good traveler, and falls asleep in his car seat easily. Not only was it the only way that I knew I could keep him in one spot on the plane, but it is also a familiar, comfort item to him. That also meant that I have a car seat for our travels once we arrived.

Toddlers require a lot of stuff. When considering what to carry on the plane with you, keep it to the bare minimum, because no matter what, you are still going to have a lot to juggle. I put all of our carry-on items in a backpack, but still had the car seat, stroller, and the kid (who generally was not in the stroller to let him run off some energy). I packed diapers, wipes, pajamas, a change of clothes, snacks, sippy cup, a few small toys, pacifiers and stuffed animal (comfort items required for sleeping), children’s earphones, and my computer which I had downloaded some of his favorite shows, ebooks, and music onto.

We all know the horror stories of babies and toddlers on a long flight. To avoid that try to anticipate anything that could go wrong, and come up with a game plan prior to it happening. If you have any luck, your trip will go better than you fear. I am relieved that my flight went much more smoothly than I could have ever hoped for, and Jacob got lots of compliments from passengers about how well he did the whole flight. Now I can only hope that overcoming the inevitable jet-lag resulting from a 6 hour time change is as painless as was our adventure in getting to this new country that I can not wait to explore!

2 thoughts on “Toddlers on a Plane”