If South Africa is known for only one thing, it is the incredible wildlife that roam its lands. Yet in the four months since Spencer and I moved here, we had yet to spot much more than lizards and house pets in the city. So with the arrival of my sister and nephew, it was time to head into the bush.

Pilanesberg National Park is just a short two hour drive from Joburg, but it is all wild. The park is set in a cross-section of a long extinct volcano, forming a stunning 220 square miles of protected game reserve ringed by dramatic green and gold mountains. All the big five live here: elephants, leopards, lions, rhinoceros, and water buffalo. They got that moniker during the height of big game hunting, as they were the most difficult animals to hunt on foot. Now, they are some of the most exciting animals to spot from the safety of a car. The abundance of wildlife so close to Johannesburg, combined with the convenience of a malaria-free, self-drivable park, makes Pilanesberg a popular weekend destination for city-folk like us.

We drove into the park for the first time just before sunset, and within the first ten-minutes we came across a hippo, wallowing in a small watering-hole. From then on, for the next two days, it was non-stop animals. We saw just about every creature we hoped to spot, aside from the elusive big cats. There was a lone rhino, cooling himself off in the mud, an elephant family marching through the bush, warthogs heading to the watering hole for a drink, kudos showing off their proud horns, giraffes munching away at the side of the road, hippo families peeking out of the water, and plenty of antelope, wildebeests, and zebras dotting the golden landscape.

We stayed in a simple, cosy cottage at Bakglata Resort right on the edge of the park. Spencer did an excellent job as our driver/guide, and Rebecca, Jacob, and I served as lookouts. Taking a safari through the point of view of a two year old made it even more exciting. We were slightly worried how he would hold up for hours in a car, but he seemed to love it. He would squeal with delight when he recognized an animal he liked, calling out “Bye-bye pipo (hippo)!” or “Bye-bye pino (rhino)!” as we drove away. He was also constantly spotting lions on the horizon that none of the rest of us could see, so he clearly has an eye for safaris. 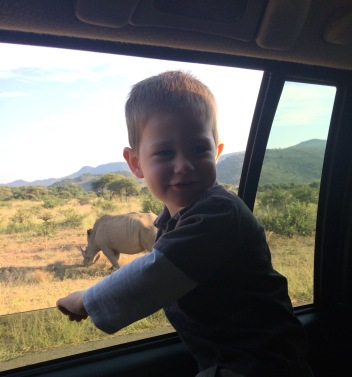 Experts at not being eaten by lions.

Without further ado, here are some of the many incredible wildlife we managed to spot at Pilanesberg!

We saw lots of families:

And some magnificent loners:

We also saw some smaller creatures:

A teeny tiny duiker, the smallest of bucks.

A group of warthogs taking a drink.

Zebras and giraffes were everywhere:

Some sights were simply once in a lifetime. 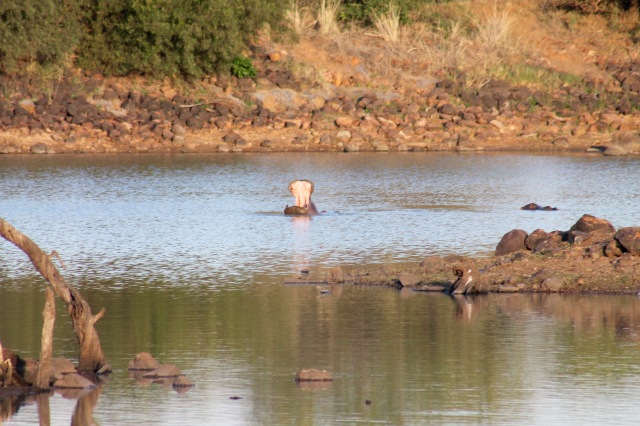 or a rhino so close to our car we could reach out and touch him,

or a couple of antelopes fighting behind a family of rhinos:

It was an incredible two days, in a beautiful place. Nature is awesome.