I have struggled to describe the places we saw in Namibia without resorting to comparing them to other places, both real and fictional. So for this last installment, I am just going to give in to the urge, in the hopes that it helps provide a sense of the amazing places we visited. 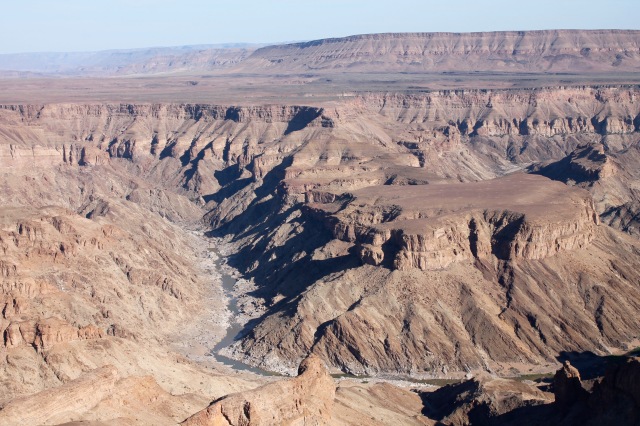 After leaving Lüderitz, we drove south into the Ai-|Ais/Richtersveld Transfrontier Park. It is a huge, nearly empty area that curves along the Orange River, the natural border between South Africa and Namibia. The Namibian side is made up of large, rugged rock formations. The only visible life are the gnarled quiver trees that fight their way out of the boulders, and the occasional family of baboons.  The area is so devoid of life and forbidding that it is what I imagine J. R. R. Tolkein had in mind when he dreamt up the land of Mordor. Considering that he was born in South Africa, that may have been the case.

The South African side of the border is the UNESCO Richtersveld World Heritage site. It has this distinction in part for the surprising amount of life that thrives in the region. Called the Succulent Karoo, the area is home to one third of all the succulent plant species in the world. It is also one of only two “biodiversity hotspots,” in the world, meaning it is an important region for biodiversity that is under significant threat from human activity.

Further into the park is the Ais-Ais Hot Springs. It is a faded old resort set in the southern mouth of the Fish River Canyon that is a few years past its heyday. What makes it worth a visit are the Ais-Ais springs. Ais-Ais, pronounced eye-ice, means “burning water” in the local Nama language. The name is appropriate, as the water comes out of the earth here at a scalding 140°F (60°C).

We took a quick hike through the mouth of the canyon to see where the Fish River ended at a dam, then soaked in the springs where they are pumped into indoor and outdoor pools at a much more enjoyable temperature. 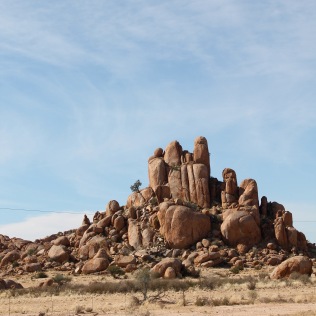 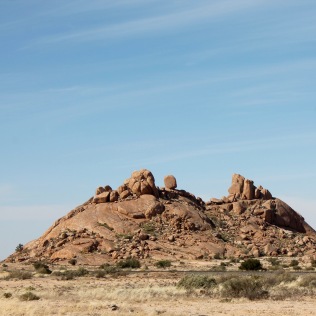 Driving even further north, giant piles of boulders lined the roadside. I couldn’t help but think of a Flintstone’s landscape when I saw them, as though a cartoon dinosaur might step out from behind them at any moment.

Just like the rest of the country, everywhere we looked was vast, dry, and empty. Skeletons of 50 year old cars lay abandoned to the desert along the route, adding to the illusion. The scenery began to look more and more like Arizona, and the drive felt as though we were on some lonely stretch of Route 66. Our overnight campsite had even cashed in on this aesthetic, building an American-style roadhouse in the middle of the Namibian desert.

Our last day in Namibia was spent on the edges of the Fish River Canyon. The second largest canyon in the world is a vast, jagged gash that cuts across the otherwise flat desert landscape. From above, it is a half mile down to the nearly dry riverbed, snaking through the rock in curving path. I have never been, but Spencer swears it’s a dead ringer for the Grand Canyon. 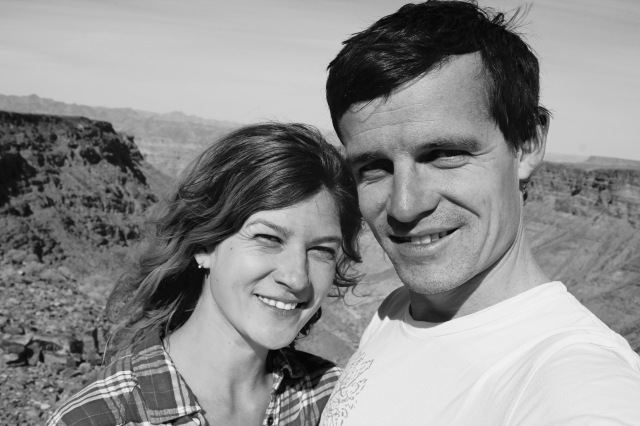