About six years ago, I remember coming across a Youtube video of a golf hole in South Africa dubbed “The Extreme 19th Hole.” I was immediately interested when I saw a thumbnail of the video showing a pro golfer peering over an enormous cliff, looking at a tiny Africa-shaped green below. I knew that some day, I would have to play this crazy par 3.

Part of a golf resort in the northern Limpopo Province of South Africa, this diabolical creation is not just a golf hole, but more of an afternoon excursion. The journey started at the 10th tee of the resort’s golf course, which was parched by the drought and bruised by the local warthogs and bushpigs that must make the greenskeeper’s job a nightmare.  We waited patiently until the drone of a distant helicopter grew louder and louder.  The pilot landed the helicopter right on the back tees while a group of golfers looked on. With the GoPro rolling, our friends Connor and Julie hopped into the helicopter along with us, and we quickly lifted off the ground. 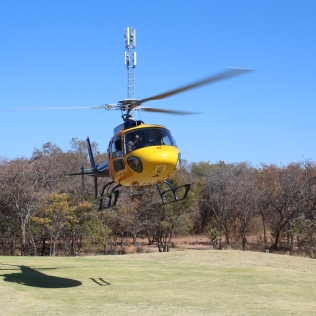 Our ride to the top 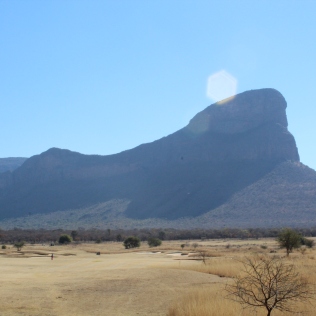 While the large peak of the impressive Hanglip Mountain seemed miles away, it took just under three minutes to land on the ridge line where the tee box for the Extreme 19th Hole was located. We quickly strode over ancient red sandstone to the cliff’s edge, looking 1200 feet down to the golf green map of the African continent below. Nico was our host for the hole from the resort, and laid out the ground rules: We each got six balls to hit, and the rules of golf apply to each shot. If our first drive went out of bounds (the green is surrounded by a Big 5 game reserve, cordoned off by an electric fence), we would take a penalty and our next shot would be our third.

I made great contact with the first drive, but it sailed right. The second try hooked left, but my third launched straight into the air for the green. One of the best parts of playing this hole was seeing the ball in flight. While a normal drive stays in the air for maybe five to seven seconds, the ball in the situation stayed airborne for about 25.  Once the ball dropped past the horizon, and past the maize-colored grass in the distance, it became impossible to continue tracking its flight. During this time, Nico radioed down to two spotters, bravely stationed near the green, so they could confirm the balls landed in-bounds. It was only after we heard a heavily sound-delayed thud of the ball hitting the dry turf that we knew it had landed. The spotters confirmed on the radio, and we packed up our things and hopped back in the helicopter.

The pilot flew out with a hair-raising maneuver, narrowly missing the ridge line while on a heavily banked turn. He flew low above the game reserve, where we could see herds of wildebeest from above, and landed on the helipad adjacent to the green. My third ball comfortably made it in bounds, but I still had a downhill, 40-yard chip to the hole, located in the heart of the Democratic Republic of the Congo (based on the Africa green map).  Luckily, I made a great chip and gave myself an 8-foot, uphill putt for par (on my 3rd drive). I left that putt out to the left, but tapped in for a 4 (officially an 8), and concluded what will always be the most memorable hole of golf I will ever play. 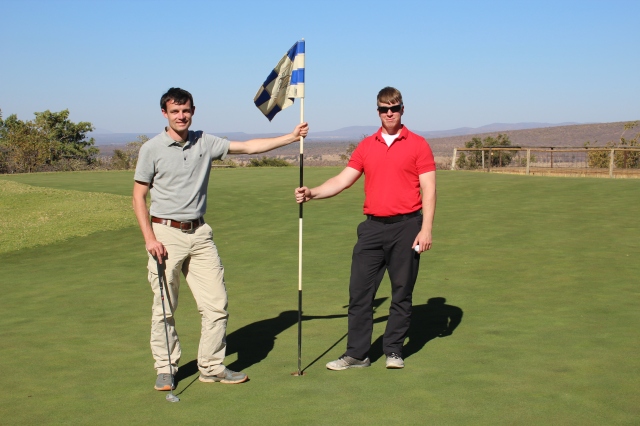 One thought on “The Extreme 19th Hole”