My favorite African animal is the rhinoceros, so I was very excited that our first night’s stay in Botswana was that the Khama Rhino Sanctuary. Khama is a wildlife sanctuary east of the Kalahari that is committed to saving the quickly vanishing rhino.

We arrived at Khama late in the afternoon, and did a quick drive around the park before sunset. We spotted some Kudu, a pair of giraffes, and a lone blue wildebeest taking his afternoon refreshment at a watering hole.

After the drive, we settled into our cozy cabin and got the braai (grill) going. We cooked up a delicious meal of boerewors from a local butchery, and sat around the coals enjoying beer and sharing stories of past family trips. 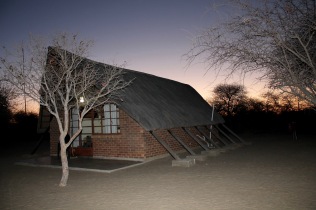 Our cabin at Khama

It was well after dark when I spotted movement behind my dad’s back. It was moving quite quickly…and was something very big. Then it passed in front of a light. It was a huge black rhino walking by not 100 yards from us.

We all held our breaths and watched as this giant creature casually strolled along, until he was out of sight in the bush. It took a while for all of our heart-rates to slow down after that.

At dawn the following morning, a guide picked us up in a Land Rover and drove us around the park, looking for any fresh signs of rhino. The plan was to spend the morning tracking one on foot, so the fresher the tracks the better. But after 45 minutes with no signs of fresh tracks, our guide finally settled on some day old footprints by the side of the road. He explained that we might have some luck with these, because it was a mother and a baby and they wouldn’t be covering as much distance.

Single file, we marched into the bush. Thirty minutes in, my faith in the guide was dwindling. I hadn’t seen any footprints, let alone fresh dung or any other sign of rhino presence.

Suddenly, the guide stopped, and pointed to a trampled area in the sand. “This is were the mother and baby rhino slept at the beginning of the night,” he said. He explained that rhinos actually have two sleeping periods over the course of the night, needing to get up halfway through and graze more.

Our goal now was to find their second resting place, and sure enough, about fifteen minutes later we came upon it. From here, the signs of the rhino’s presence were much more clear. We came upon literally steaming piles of dung, and had to hold our breaths as we passed. My faith in our guide was fully restored, I felt silly for having doubted him at all.

Knowing we were getting closer, the guide sharply changed directions and told us to walk very, very quietly. Then, he pointed to bush ahead.

Just 200 yards away was an enormous beautiful rhino, her baby tucked at her side. She was looking right at us, and stood still for only a moment as we stared back in awe. Then, she broke into a run, little one trailing behind; luckily, she ran in the opposite direction and not toward us.

As we walked back to the car, our guide taught us more about the rhinos. There are two types in Southern Africa – the white rhino and the black rhino.  We had just seen the white rhino, which is the more common species. Both rhinos are gray in color. The name “white” actually comes from the Afrikaans word for “wide,” which describes the white rhino’s more square-shaped mouths.  Black Rhinos are slightly smaller and have a pointed mouth shape.

Our guide explained that the white rhino tends to be more timid, which is why she ran away from us so quickly. The black rhino, on the other hand, is much more aggressive. “If you see one,” our guide told us, “it’s too late to run.”

He then went on to confirm that the rhino we had seen at out campsite the night before was indeed a black rhino, one of only 4 in the park. So I guess we were just very lucky, in more ways than one!

Sadly, both rhino species are endangered due to poaching, and the black rhino is dangerously close to extinction. These beautiful creatures are being killed at alarming rates across Africa to fuel the high demand for their horns in Asia.

It was an awesome experience to track and meet these animals in their home environment. Hopefully it’s not too late for these magnificent creatures to be saved so that future generations can have the opportunity to do the same.